Before reading this article make sure that you have read and understood the clarification about the incorrect information regarding dangerous airports HERE!!!

Unfortunately Skiathos airport became very famous not for the beauty of the scenery of the aircraft flying low through and above you head, but due to the jetblast at finals runway 02.

People those days are doing crazy, sometimes stupid, things in order to upload something on social media and increase their audience. The stupid part of this is that humans put their lives into danger for no particular reason.

From the other hand traditional media are no longer searching for information in order to transmit news. Instead they are using a much cheaper method, the copy/paste method, by transmitting anything that looks interesting or strange that is found in social networks. The combination of stupid people doing stupid things for some “likes”,  and unreliable media, is transmitting extremely wrong information to the public.

However a lot of people still ignore the danger of jetblast. There is a number of people who stand behind the jetblast, knowing what to expect. But dangerous situations are rising up while people, who don’t know what will follow, and stay behind an airplane that is about to take-off, just because they see the others doing it, or because they want to try the challenge. The fact that so many people stay there while a jetliner is turning at the end of the runway before take-off, is also convincing unsuspectingly other people to stay behind.

This is the most dangerous part of the story.

We have noticed all these years parents with infants in their arms standing behind a Boeing 757 just before take-off. We have noticed tourists with expensive cars making sort stops just behind the aircraft, ignoring totally the damage that the jetblast can cause.

We highly recommend to all:

STAY AWAY FROM AIRCRAFT JETBLAST

REMEMBER YOU ARE COMING HERE TO ENJOY YOUR VACATIONS

YOU ARE WELCOME TO ENJOY THE ARRIVING AIRCRAFT LANDING IN SKIATHOS BUT BE CAREFUL WITH DEPARTING AIRCRAFT!!!

Bellow there are some contours showing jetblast temperature and force (wind speed) during idle power and take-off thrust of a Boeing 757-200, the biggest aircraft operate at Skiathos airport. 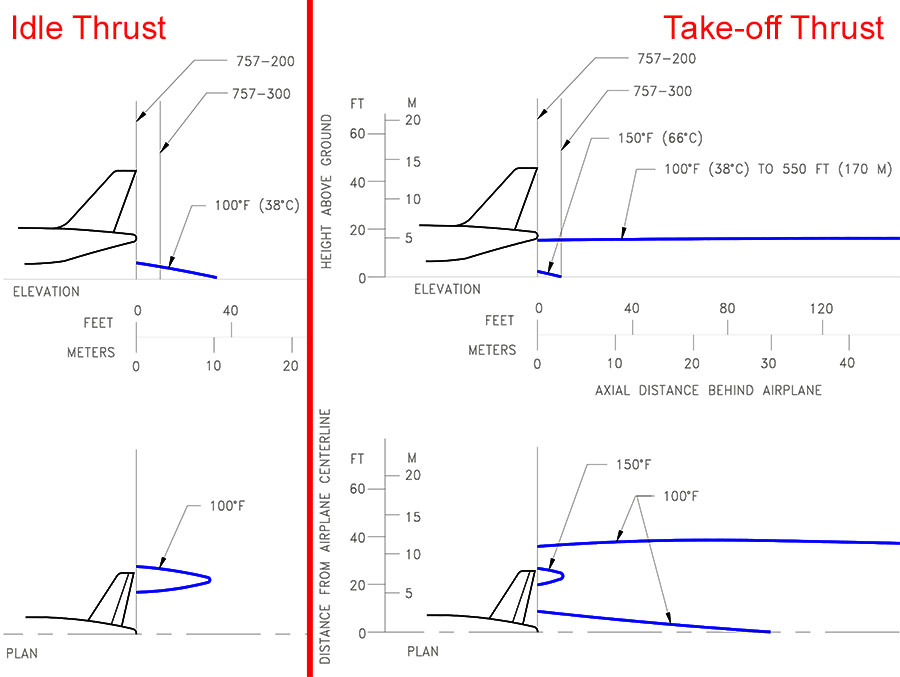 Those calculations are used for airport planning in order to ensure safety on the ground between aircraft and servicing vehicles, employees and passengers of course. They are calculated from computer data and not from actual measurements.

In reality, the jet blast effect can be less than the computed one which is always computer from the safe side. If those calculations were actual, and the values are realistic, we should have something like 10.000 deaths due to flying tourists at Skiathos every year after every departing Boeing 757 from runway 02, other 5.000 blasted by B737NGs/Airbus A320 & A321, 5.000 by Boeing 717 etc…

But all these years we have only very few injuries, little bit more damages on vehicles, hundreds pair of sunglasses in the sea with similar amount of beach towels, hats and other “light” summer equipment, enough to open a huge tourist shop!

According to our estimations the number of incidents compared with the amount of people standing on runway finals every day is less than 0,3% (don’ t try to convince us for something else than that, because we are aware of incidents that are never reported to the local Medical Center, so our data are much more precise…). And the biggest amount of injuries were not behind a departing Boeing 757 but mostly behind  of a Boeing 737NG and behind the much more under powered (compared with the other two) Boeing 717! (Photos of B717, B737 and B757 engines at the bottom of this page)

Here is a video of 1993 at San Francisco airport. For safety training the authorities drove a towed vehicle behind Boeing 767-200 engines with take-off thrust set. 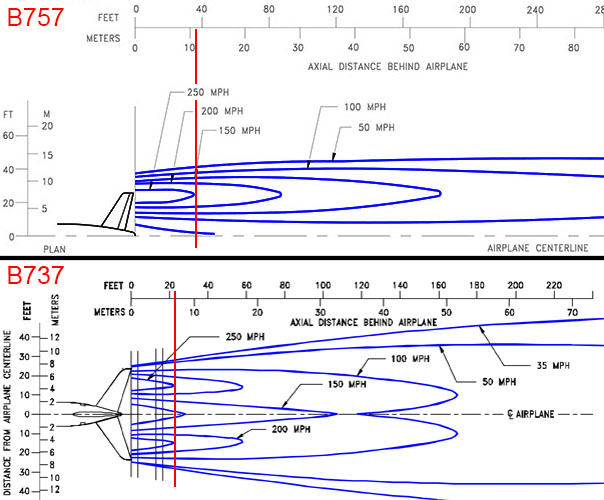 This is why more incidents occurred by (smaller) Boeing 737s than by (bigger) Boeing 757s. And a last example is the even more under powered Boeing 717 with 20.000lbs tail mounted engines. According to the manufacturer calculations (see image below) the maximum speed of a 717’s jetblast is 150Mph, much lower than the other two examples above. But because Boeing 717 is a fuselage-mounted engines aircraft, its jetblast is affecting much more the area behind…

Let’s make an example with a Boeing 737-800NG in Skiathos with actual data, distances and calculations and forget the theory. As mentioned earlier, jet blast speed is calculated by “clean wing”, meaning no flaps, and with “clear surface – area”.

We used a wind speed meter behind a Boeing 737 in Skiathos, to calculate the jet blast speed. The speed meter was placed at the position shown on pictures below, at 40 meters away from the exhaust of the CFM engines of an XL Airways Boeing 737-800 aircraft (The specific flight was too heavy and performed a back track very close to the road. Usually the exhaust of the engines in Skiathos are more than 60 meters from the public road).  Our speed meter was placed within 100mph area, that is indicated on the Boeing charts. But we got a measurement of just 65.2kts = 78.25mph. This 25% reduction is not because Boeing calculations are wrong (LOL) or they lie to us (LOL)…

It is because the area between engines and the top of the fence is not flat or even clear. If you make the same calculations in the middle of the public road, expect to have more than 50% reduction of 100mph zone due to friction with obstacles. You can notice on the video with the Boeing 767 at San Francisco that the surface from engines exhaust till the towed track is flat and clear and jet blast effect is direct. 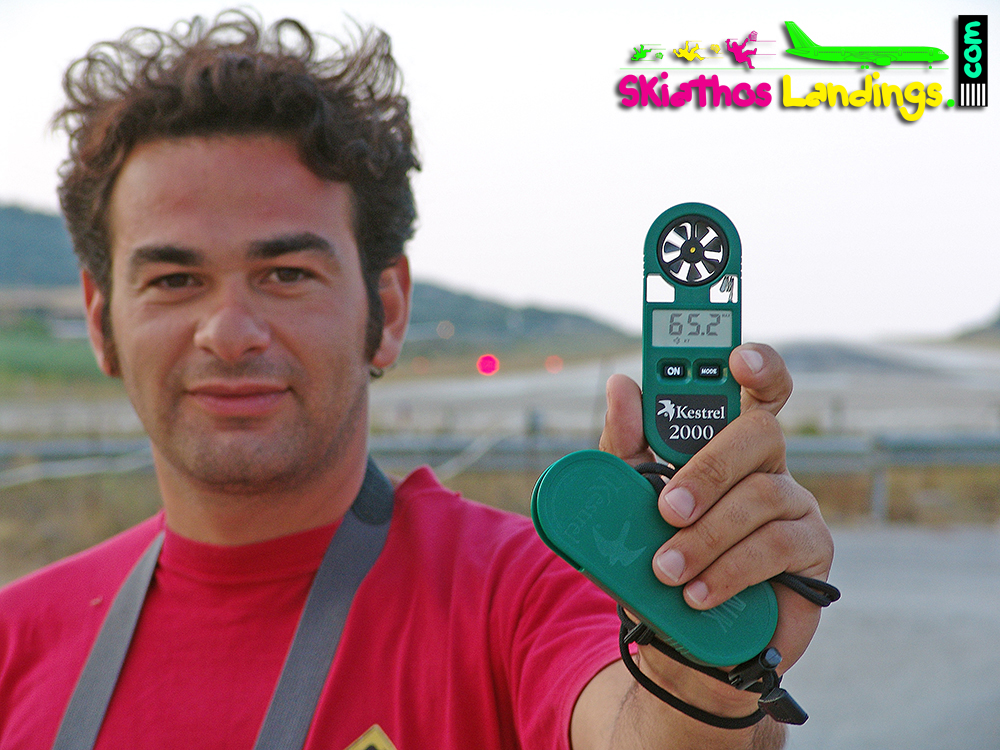 Actual distance from blast at Skiathos during take-off thrust

So having in mind the results of those calculations, why we have incidents. How is possible the jet blast is blowing out ATVs? Actually it is NOT. Let’s see what the truth is and what the reasons of the incidents are.

How many of you stand or walk during a windy day against a wind of 10 Beaufort speed? Standing behind a take-off at Skiathos is about the same. BUT: standing against 10 Beaufort wind is something you are prepared to do. If you try to stand against a wind stream rising suddenly from calm to 10 Beaufort, you will probably fall down. This is somehow the problem with the blast. Many people are not aware of what will happen in the next few seconds. People who are not familiar with the sudden noise, the hot air temperature, and worse of all, the flying gravel, end up acting with panic, running away from it, instead of protecting themselves, and falling down. For a “familiar” with jet blast person, the problem you cannot solve is the flying gravel. But even if you are “familiar”, if the departing plane holds parking brakes and keeps take-off power for several seconds (the pilots don’ t spend fuel for fun, there are standard operating procedures sometimes for safety reasons that they have to follow), after 15-20 seconds you will probably cannot breath, so you get in a kind of a panic situation….

Flying gravel is the most dangerous problem. See this car glass! It looks like gunfire! But they are just flying gravel. And the most important, the damage was NOT during take-off but during a back track!!! The can was NOT parked aligned with the runway center line (click to enlarge). 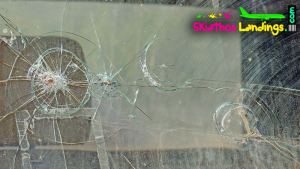 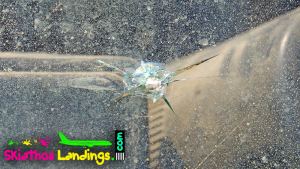 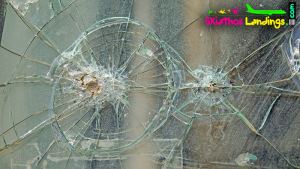 According to ALL the above you can realize that the jet blast speed is not a direct problem but an indirect cause of incidents that may possibly lead to injuries, even DEATH. A fall on a rock or on the street may kill you in just a moment.

In aviation world, aircraft, humans and vehicles are moving in the same environment (airport) under procedures that ensure safe in-between them distances. The original construction design of those airport environments was based on specifications that are compatible with those procedures. However existing unique environments around ariports like in St Maarten, Skiathos, Taipei Songshan (and many other airports around the world) were never a part of an airport master plan, and were not meant to be so close to airport runways. This happened gradually during the years due to urban expansion. Even ICAO recognizes those exceptions and has a relevant legal framework for those airports. 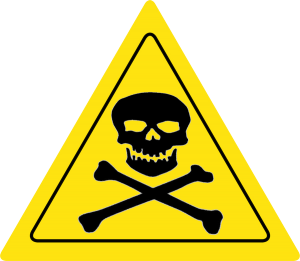 The conclusion of all these is one simple think:

DO NOT STAND BEHIND ENGINES

JETBLAST effects are unpredictable. There is no reason and no fun at all put your body in danger.

Finally as aviation specialists we suggest you to stay on a safe distance from airplanes, not only because of jet blast. Ask your doctor about the negative effects of burned JET A1 fuel to your lungs. If you have a pilot or aviation related friend, ask him how many aircraft systems are active/operating during a take-off and landing and what kind of irradiation is transmitted around. Enjoy your drink from a sort/safe distance for you and your family!

Boeing 737-800NG ready for take-off from runway 02 at Skiathos airport, with more than usual extended flaps (due to short runway). The jetblast flow in conjunction with the flaps position creates Bernoulli’s effect with the ground.

Boeing 757-200 during take-off from runway 02 at Skiathos airport. Notice the higher position of engines and flaps, than a Boeing 737. This value of height is major coefficient for jetblast, as seen also and of Boeing diagrams.

Tail-mounted engines making Boeing 717, even if they are higher enough than other jetliners, very dangerous. This because jetblast from take-off thrust is consetrate to a very short line. Volotea Boeing 717 is about to take-off from runway 02 at Skiathos airport. 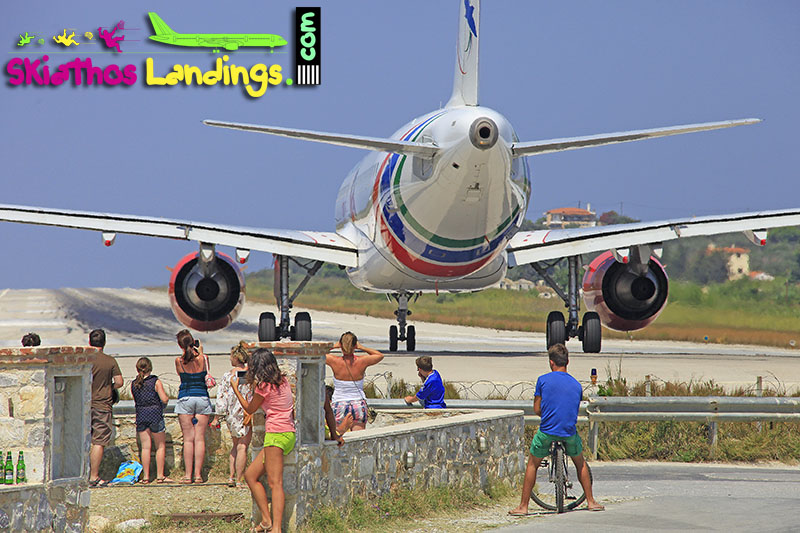 Airbus A320 is something between Boeing 737 and Boeing 757. But Airbus A320NEO (operated till now by SAS) is much more powerful and dangerous. Take-off from runway 02 at Skiathos airport.

This photo is a good example of all we wrote above regarding computing calculations and “real thing”. It is an MD-80 of Inselair during take-off at Saint Maarten. As everyone can understand, a Boeing 747-400 with 396.000kg of the-off weight is extremely much more powerful than a 72.600ke MD-80. According to the “papers” it looks impossible to stay behind a 747, but most possible behind an MD-80. In real, If you stand behind a Boeing 747-400 you will survive. Due tail-mounted engines, there is no way to do it behind an MD-80. Many people try but none of them hold his position for more than 10 seconds. Notice the jetblast distance on the sea…!