By Skiathos Landings18 March 2020 No Comments

Notes for summer timetable:
(The text below was written before March 1, 2020. With RED TEXT are additional notes after Covid-19). At the bottom of current page recent news, reschedules ans cancellations for summer 2020 timetable at Skiathos.

Bluebird Airlines flights between Skiathos and Tel-Aviv may change on Friday, to late evening.
It is not clear yet if TUS and Bluebird will fly from Tel-Aviv or it is the same tour operator. According to information provided by the end of November, TUS Air was supposed to use Boeing 737-800 on Tel Aviv-Skiathos route. Most probable, we expect to have TUS Air Fokker 70 on route Tel Aviv-Skiathos twice a week. 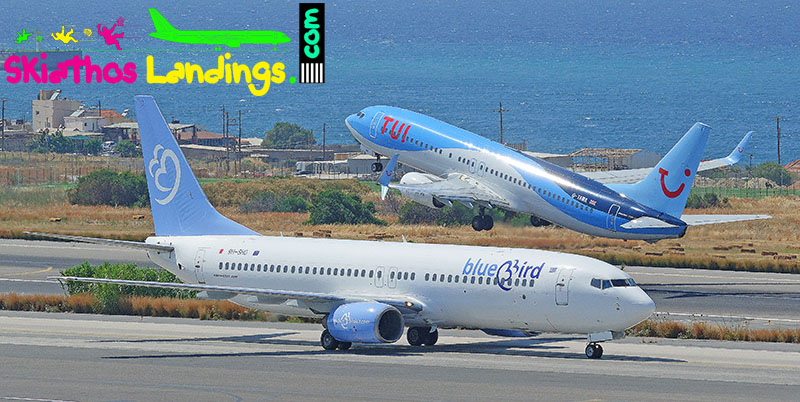 Still, we may see changes on TUS Air flights since the rebranding of the airline is not yet finalized. Initial plan was to rebrand to Air Elegance, but that is no longer valid. According to latest info, the airline will be rebranded with a new name and due to lack of airplanes, they may use Sukhoi Superjets. 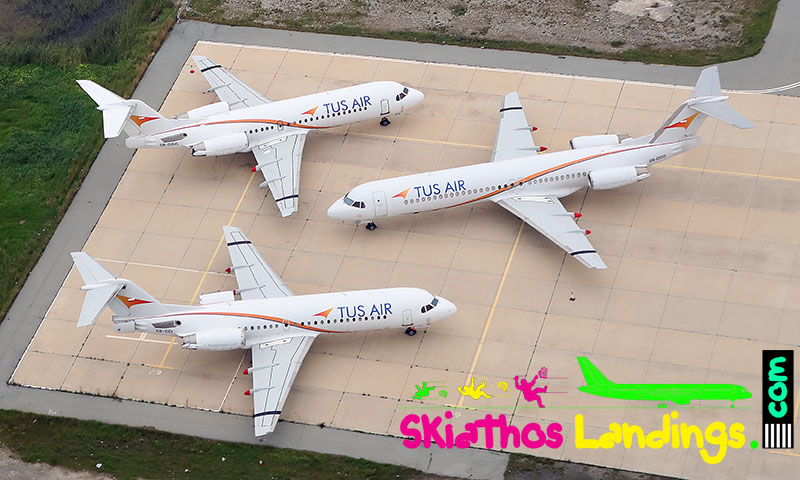 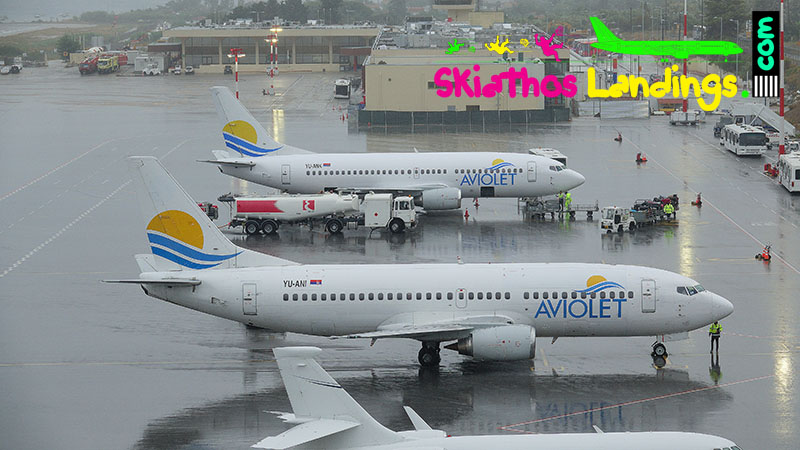 Air Serbia (like every season) did not finalize its flights by now.

Laudamotion flights will be operated by Ryanair Boeing 737-800 aircraft. The initial request for Skiathos flights was 1st of April to 24th of October 2020, but April and October were on separate request. Initially, sales started for April and October, but very soon they disappeared from the system. 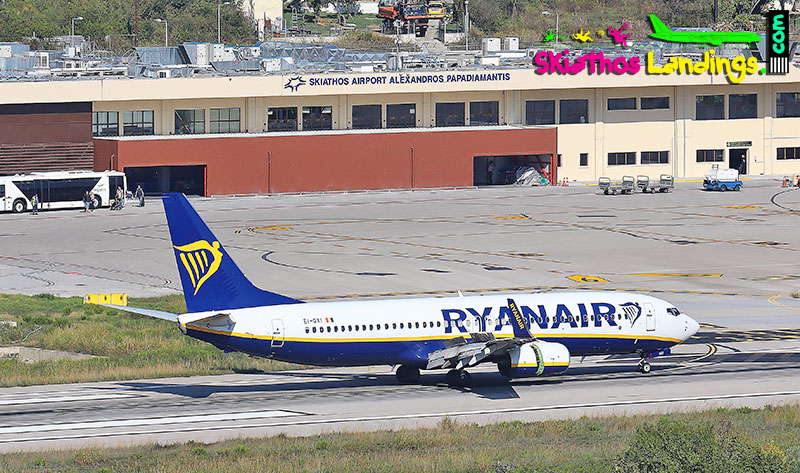 Extra Austrian airlines flight from Graz on Sunday, will be replacing the gap of Astra Airlines flights. The Greek carrier was supposed to operate every Sunday the route Skiathos-Klagenfurt-Graz-Skiathos with 112-seater BAE-146 from 31st of May to 4th of October 2020. Unfortunately, Astra Airlines ceased operations and the route was replaced by 76-seater Dash 8Q400 between 31st of May and 27th of September 2020.

During the end of October till early November, we saw a lot of news for summer 2020 routes at Skiathos. It is very hard to provide accurate information from November of a year, to May of the next one. After Thomas Cook collapse, that kind of information became hard to be accurate. Calendar is showing early March and flights are not finalized yet! The results out of this:

Transavia France will not operate flights to Skiathos for summer 2020

Easyjet will not operate flights to Skiathos for summer 2020.

The summer season of 2020 will be a milestone of a transition from charter carriers, to low-cost airlines era. Few airlines, such Easyjet for example, didn’t take the risk to make an expansion based on Thomas Cook gap. End of the 2020 season will be very interesting, especially for a destination such as Skiathos. We will see if Thomas Cook gap from UK could be recovered in just one or two seasons.
From our experience, it is impossible to recover 100% of Thomas Cook loss in less than 7-8 years. That experience came out of Excel Airways collapse back in 2008 (details can be found on article of the Greek civil aviation magazine “REMOVE BEFORE FLIGHT” in Greek language).

After mid March 2020 aviation industry changed a lot. We are not talking for a “negative effect” for Skiathos traffic. We are talking about worldwide collapse of air transport…
We expect that till the end of March, it will be very unlike to see any passenger airplane in flight, at least in Europe. Most of the touristic facilities will stay closed till the end of April anyway. But even if they start to operate by early May or even June (we doubt it…) it looks very unlike to find a “survived” airline to visit our island!

Lets talk about airlines related with our small airport in Skiathos.

1.0 Condor already got an illegal government loan in October to survive (from now on state financial support will be legal) through the winter 2019-2020. How will they survive now? How would an investor fund an airline like this during such a crisis?

1.1 Aegean Airlines was supposed to participate to Croatia Airlines privatization and together to cover the missing gap of Adria Airways in Slovenia. Flight Ljubljana-Chios-Skiathos was possible to operate for summer 2020 or 2021 under this scenario.

1.2 Ryanair was supposed to operate Laudamotion flight Vienna-Skiathos for 2020. On 16 March 2020 Ryanair announced that is planning to ground even ALL fleet till further notice (details here). However the press release was removed one day later. But if you read the press release you will understand the financial impact on an airline. There is no information if the flight will operated nornaly or not, since effective 17 March 2020 Ryanair (incuding Laudamotion) is offering refunding of booking cancellation to all passengers. 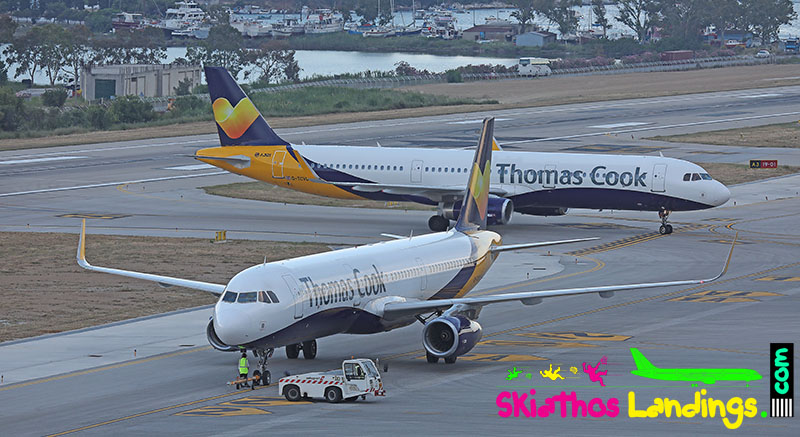 Thomas Cook UK Airbus A321 with basic Monarch livery in 2019!

1.3 By November 1st 2019, with the initial request of flights for the summer 2020, we noticed a huge expansion of TUI in Skiathos. It was very hard to believe that TUI would successfully operate that schedule (available here). Thomas Cook gap has nothing to do with new destinations as Doncaster and Exeter,for Skiathos. Thomas Cook took over Monarch a couple of years ago, and in 2019 the airplanes were still carrying basic Monarch liveries. Thomas Cook ceased operations,before completing the repaint of Monarch aircraft! To be more specific, last flight of Thomas Cook at Skiathos operated by an ex Monarch painted aircraft as reported here. So after Thomas Cook collapse,we see TUI stepping on the same road! So,here is the result: 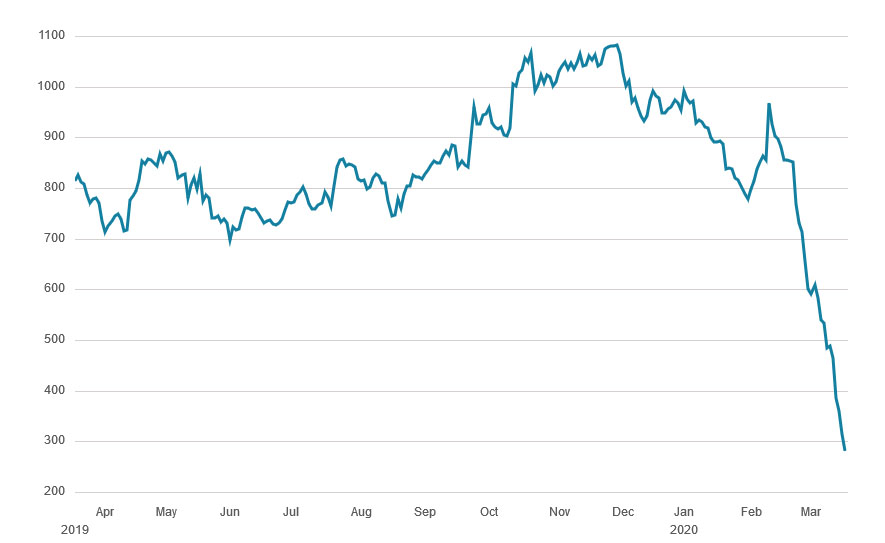 Even Covid-19 problem ends for i.e. on April 1, 2020, the airline industry requires a lot of time to resume operations back to normal.  So much time that current summer season in Skiathos is almost lost.

23 March 2020: Finnair announced cancellation of Skiathos flights for summer 2020 – Finnair schedule was for 11 flights from Helsinki from 28 May to 6 August with total 3.168 seats

24 March 2020: Ryanair (and Laudamotion) announced that the fleet will remain grounded till end of May 2020 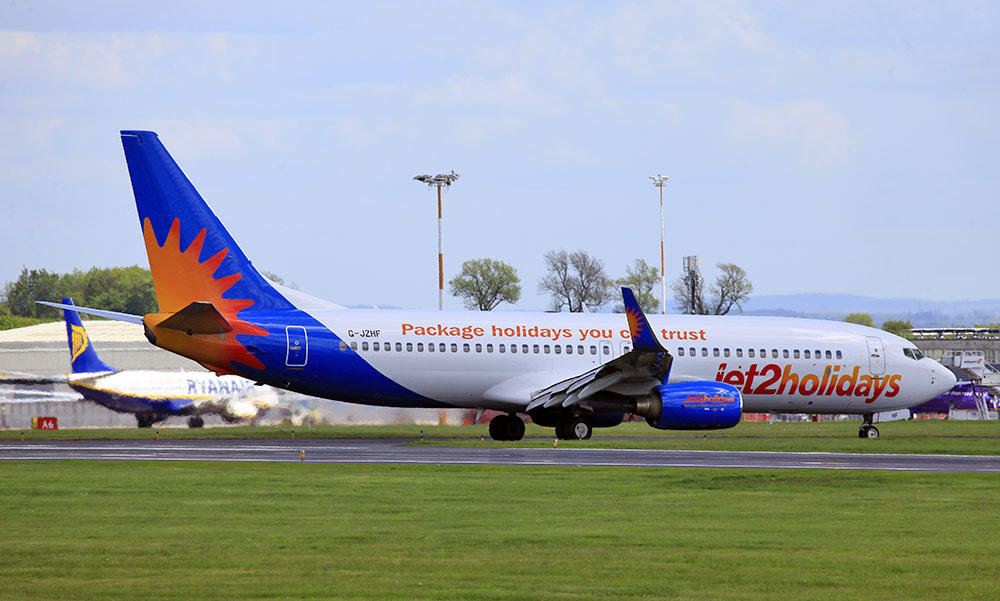