By Skiathos Landings12 November 2019 No Comments

This is a review of Skiathos traffic statistics for summer season 2019. The data starting by first charter flight for 2019,from end of April, till end of October. You may see different data figures regarding passenger numbers, since our analysis is related only with passengers with destination/origin Skiathos, thus means direct revenue for the island. For example 21.498 transit passengers are not included.

In a few days we will release a similar analysis for summer 2020, since there are many question marks for the future of Skiathos traffic. The European airline market is changing a lot… 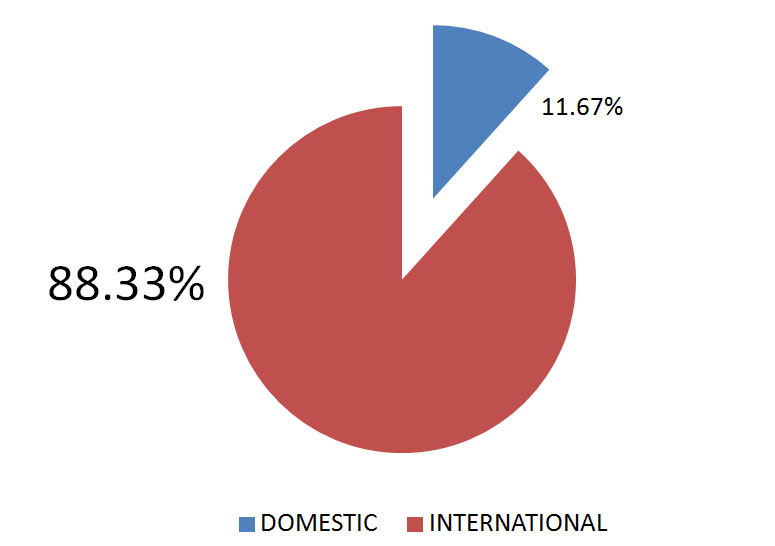 1.2 Domestic traffic analysis, share by airlines/destination (based on available seats for summer season only) 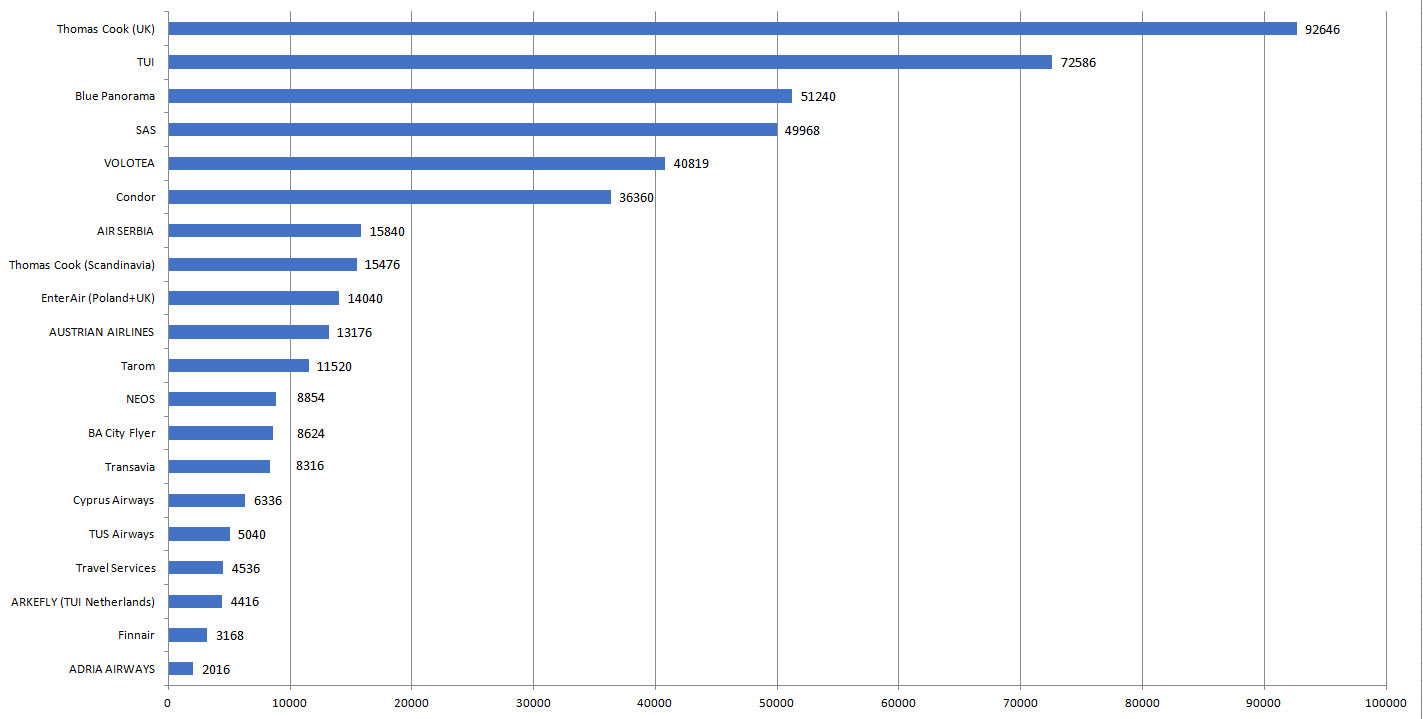 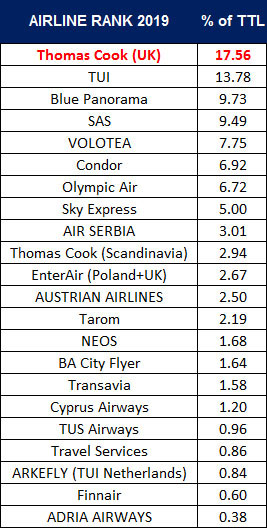 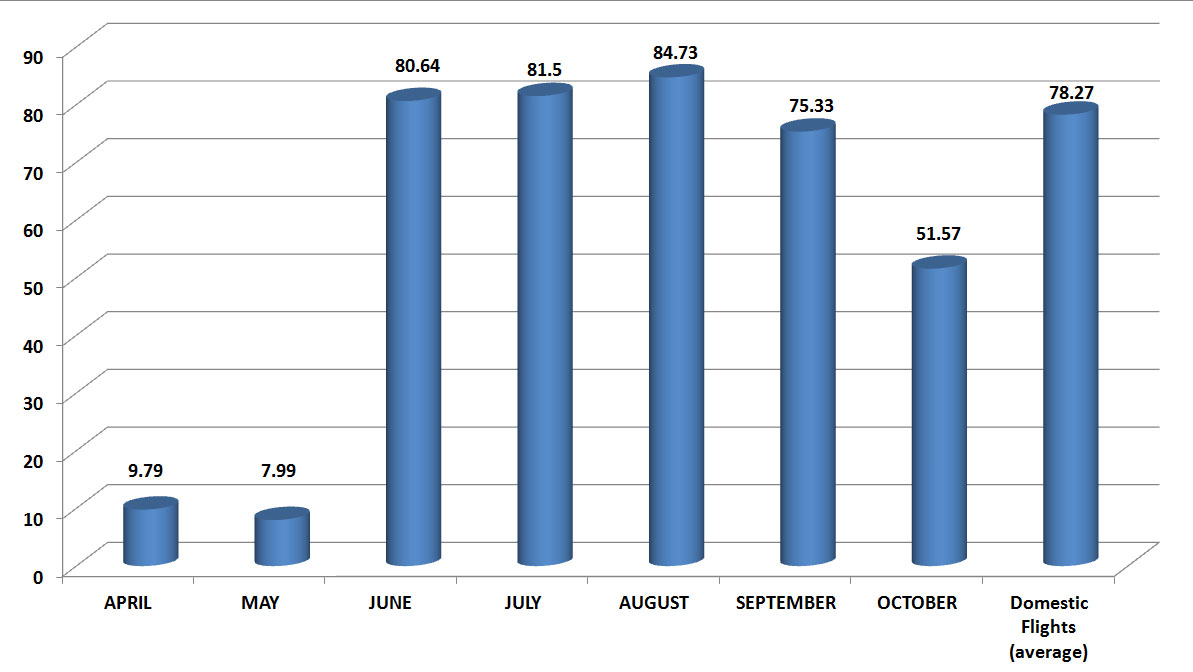 1.5 Monthly Load Factor for International Flights and Average Load Factor for Domestic Flights for summer Season 2019. Remember 80% or more is the “required” value for profit…

The traffic of Skiathos was not affected by the collapse of few airlines which took place after the end of August.  Adria Airways, Thomas Cook UK and Thomas Cook Scandinavia operated at Skiathos airport, but their collapse the last week of the month, noticed a minor effect on traffic figures. This is because Thomas Cook Scandinavia completed the schedule charter flights just a week before the collapse. Something similar happened with Adria Airways (details will follow below).

Here is a list with Skiathos Thomas Cook flights affected: 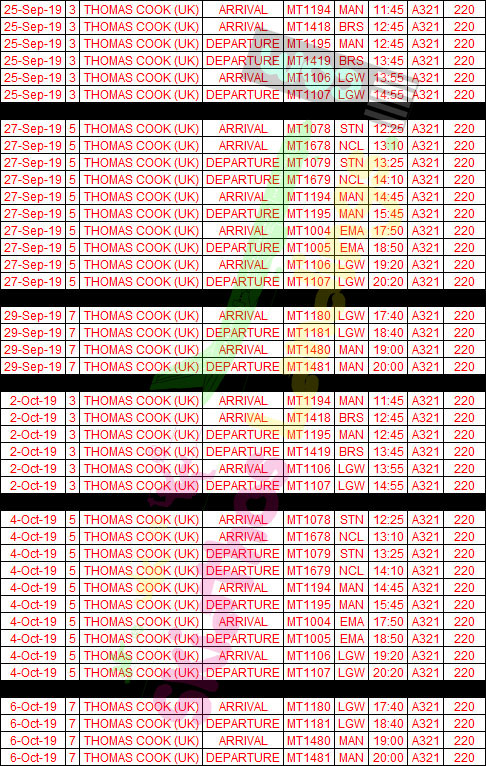 A list of Thomas Cook repatriation flights can be found HERE. 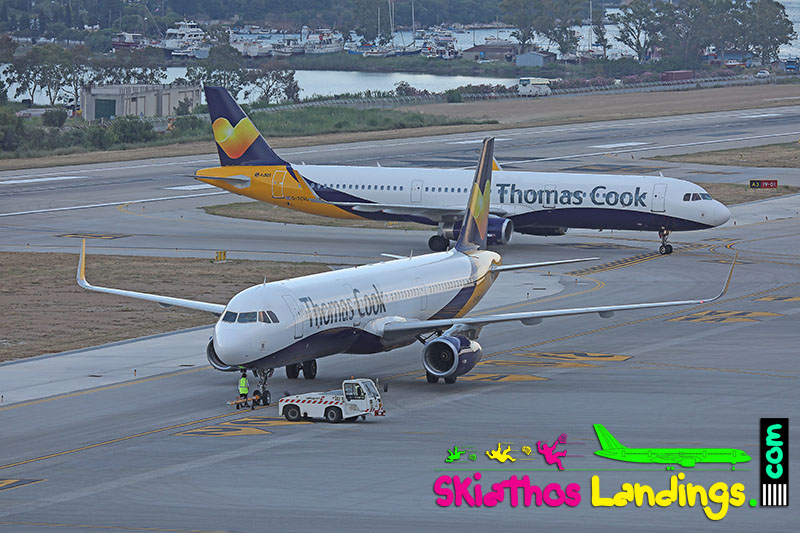 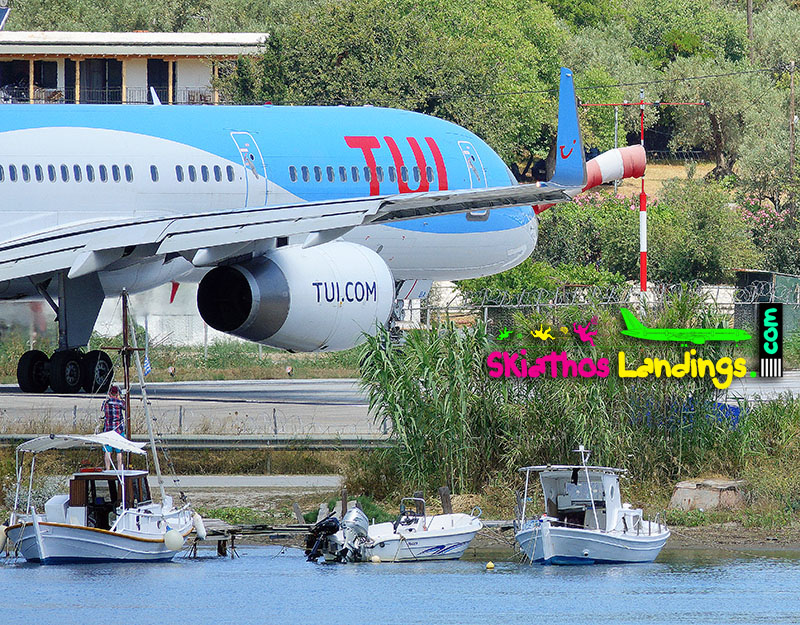 TUI Airways seems to be facing low figures on Luton flights. Originally the flight was planned with Boeing 757 (221 capacity) but even on July and August, most of the flights operated by 189-capacity Boeing 737-800. However TUI figures remained similar to 2018. 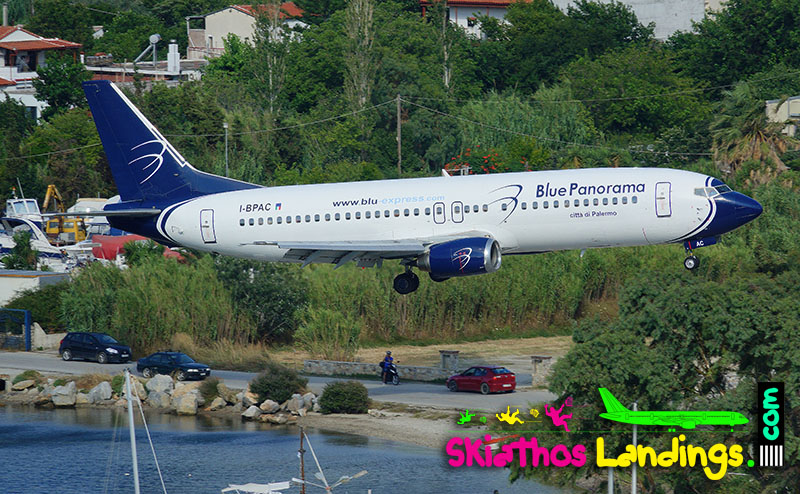 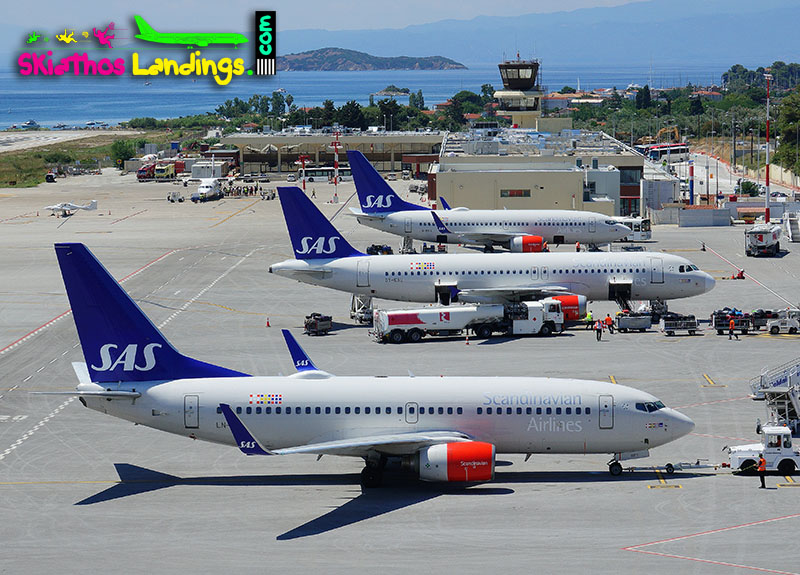 Scandinavian Airlines (SAS) presence at Skiathos is steady for the last couple of years.

1.6 Country rank for summer 2019 (based on available seats) We have two tables of Country Rank by traffic for summer 2019. On the left table we separate the four Scandinavian countries. On the right we merged them as one. As a single origin country is ranked at 3rd position. This market is something very interesting for the island. 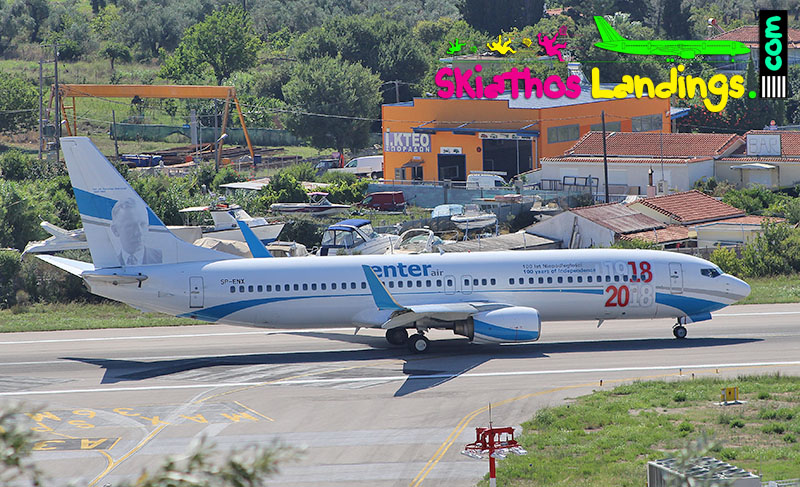 Poland notices a huge loss in terms of traffic. From 12.690 seats in 2018, in 2019 dropped to 6.480. This was due to collapse of Small Planet Airlines last November. Small Planet Poland flew in 2018 from Katowice and Warsaw and asked for Poznan slot for summer 2019. Enter Air covered the half of this space for 2019.

Traffic from Romania was increased by a third Tarom flight every Saturday, adding one more destination to Skiathos network, Timisoara. Available seats increased from 8.160 in 2018 to 11.520 in 2019. 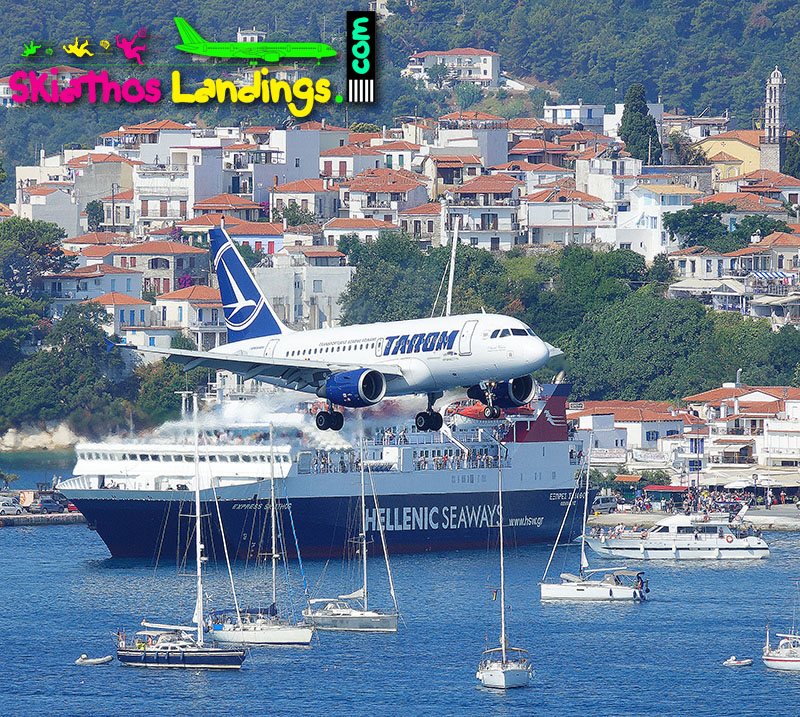 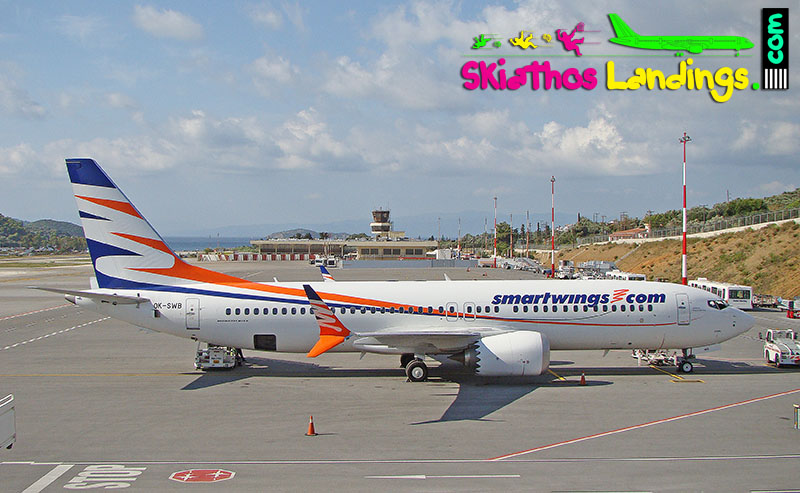 Travel Service reported a decrease in 2019, to 4.536 seats instead of 7.710 in 2018. That was expected by the beginning of the season since the company announced a 25-30% reduction of their flights due to the grounding of Boeing 737 Max. On this photo a Boeing 737 Max of Travel Service/Smart Wings at Skiathos back in 2018. 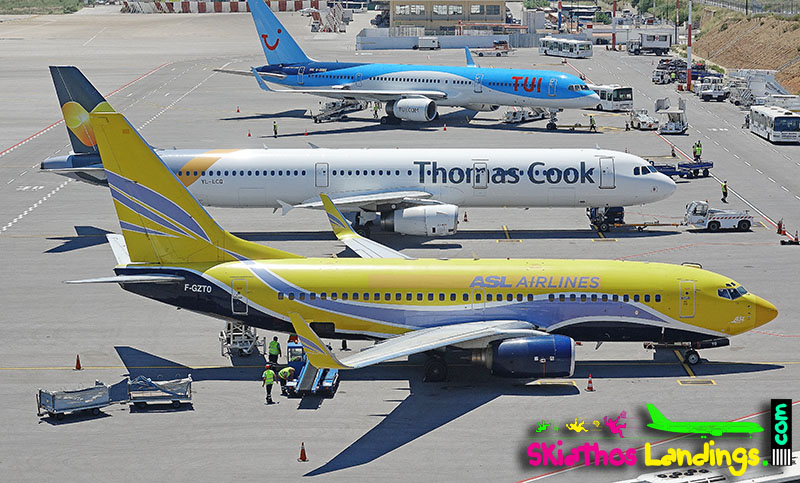 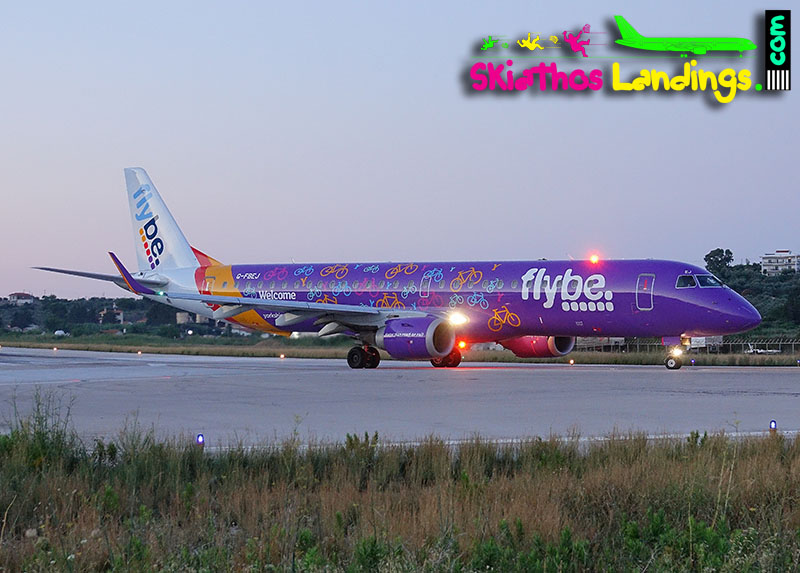 Also FlyBe left Skiathos for 2019. The airline began flights from Southampton in 2018 adding 3402 seats on the market. Actually as reported HERE it was the first direct charter flight from Southampton to Greece. The company was planning to double the weekly flights for summer 2019, but the acquisition by Virgin Atlantic changed those plans. 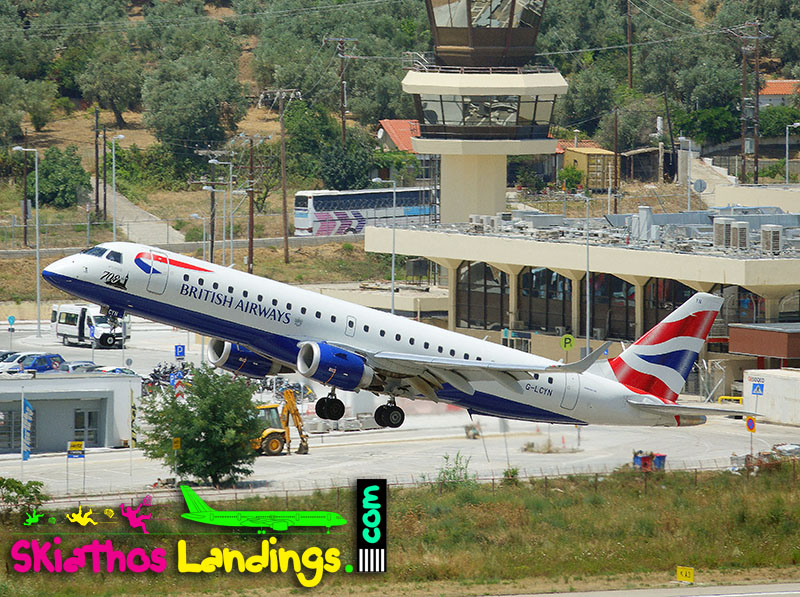 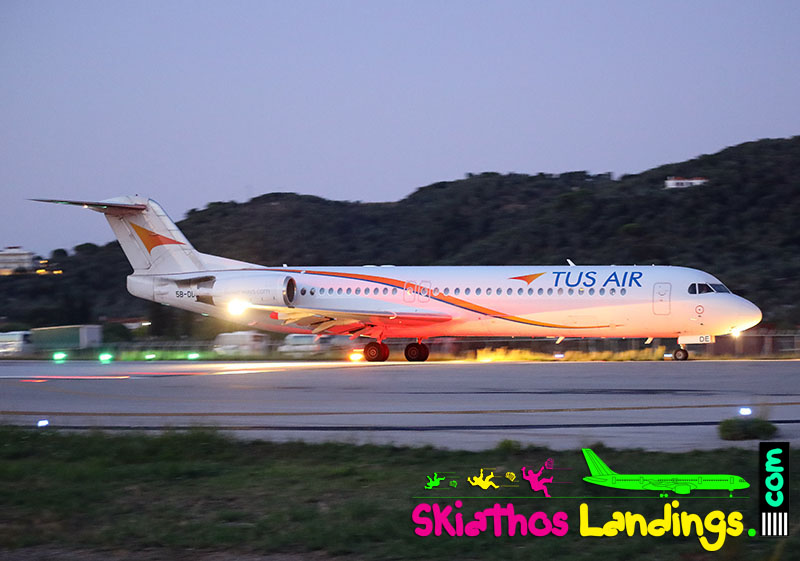 There is an indication of interest from Israeli market but the traffic is not growing. Instead, Skiathos is facing a decrease of arrivals. During 2019 the problem was the availability of airplanes by TUS Airways, related (indirect) with Boeing 737 Max issue, as reported previously HERE. TUS Airways remained almost steady the last two seasons, with 5.440 seats (2018) and decreased 5.040 (2019). This situation may change next summer. Details will follow on the upcoming Forecast analysis for 2020. 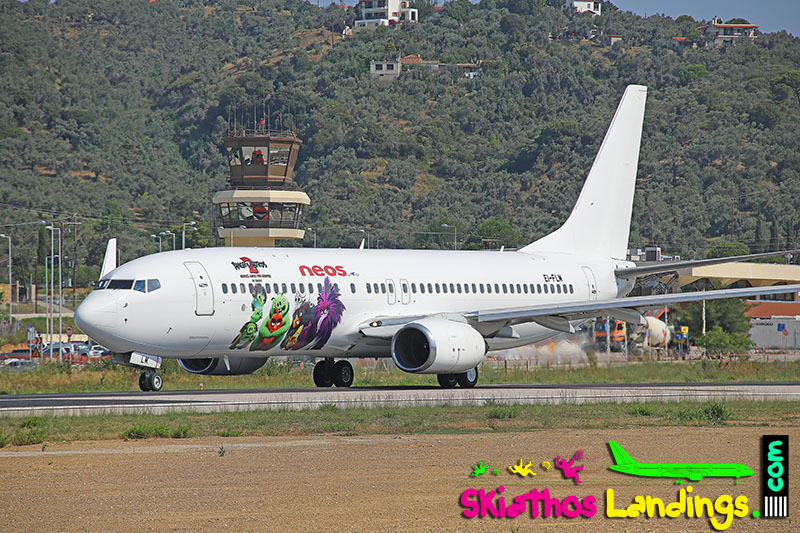 NEOS noticed an increase of passengers in 2019. The airline operated flights with total capacity of 8.854 seats compared with 5.440 in 2018. 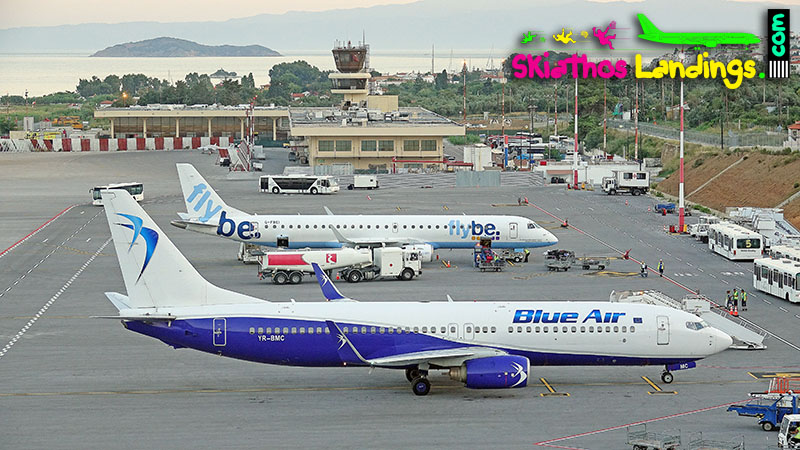 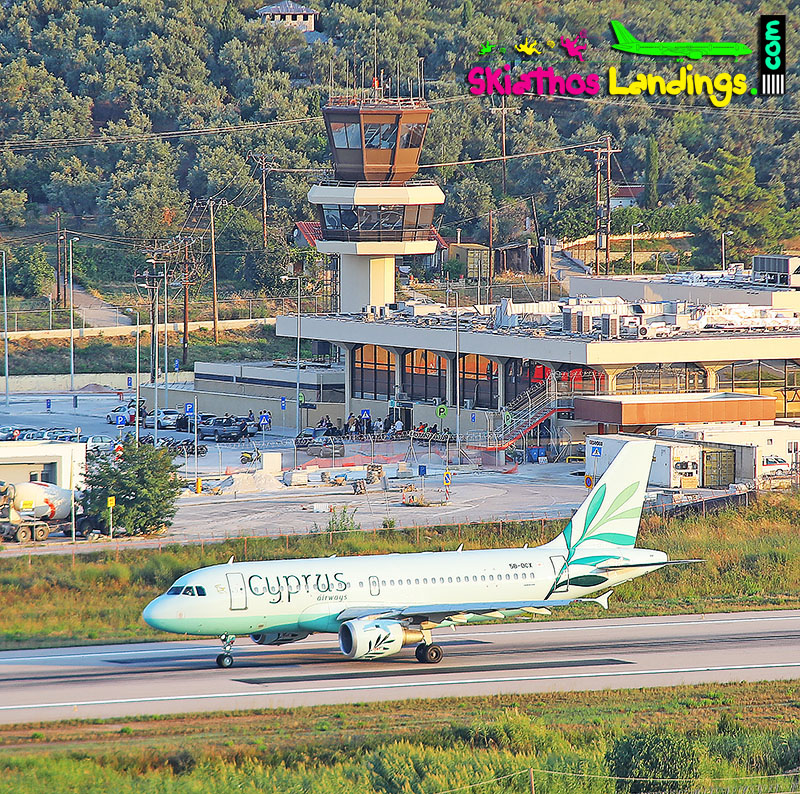 Cyprus Airways Airbus A319 seen at Skiathos in 2019 for the first time. TUS Airways fleet reduced and Blue Air left Skiathos, since the airline made a kind of cooperation with Cyprus Airways on many routes. The result for Skiathos was 6.336 seats in summer 2019, -2.378 seats less than 2018.

Passengers figures generally in 2019 seems to be reduced than 2018. The airline which kept the figures on positive value was Volotea. It was the airline with the biggest growth rate in Skiathos for 2019 but possibly and for the airport recent history. Volotea offered 34.000 seats in summer 2018. The summer of 2019 the airline increased that number by 20.05%, or by 6.819 to 40.819 seats! The main reason of the increased figures was the replacement on 125-seats Boeing 717 by 156-seat Airbus A319 on many flights of Volotea this summer. 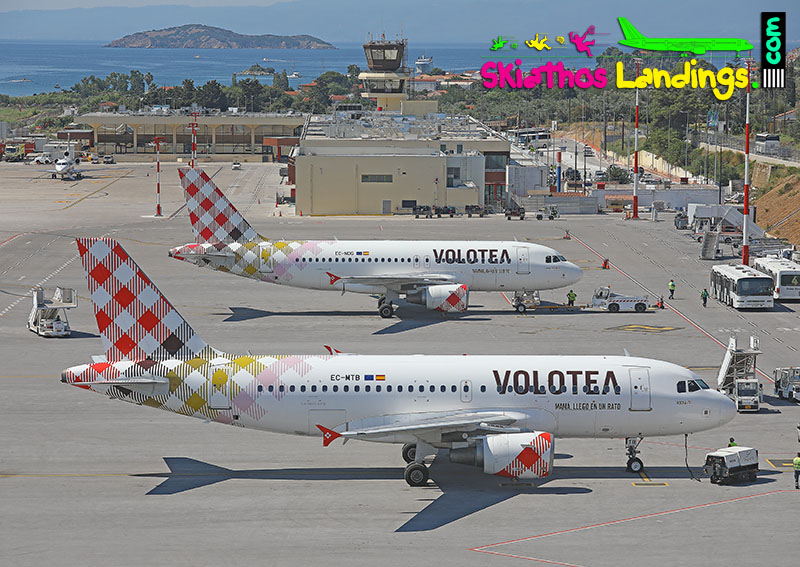 Two Volotea Airbus A319 together at Skiathos 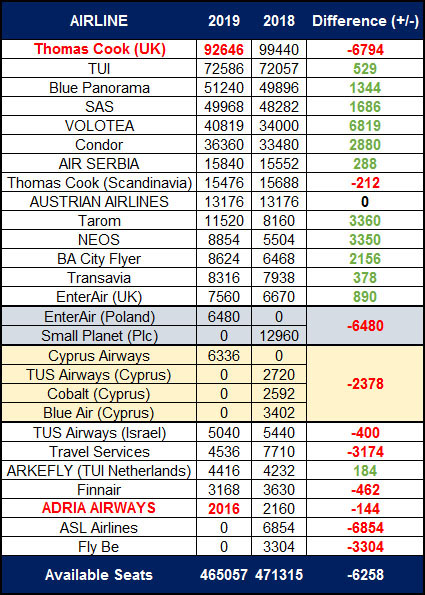 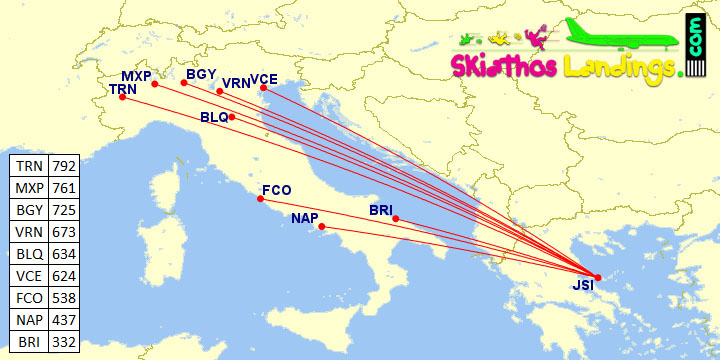 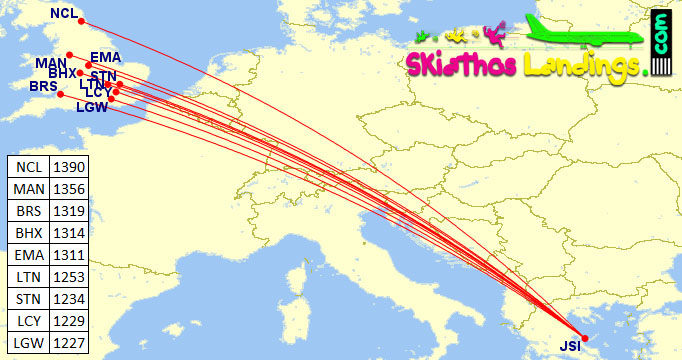 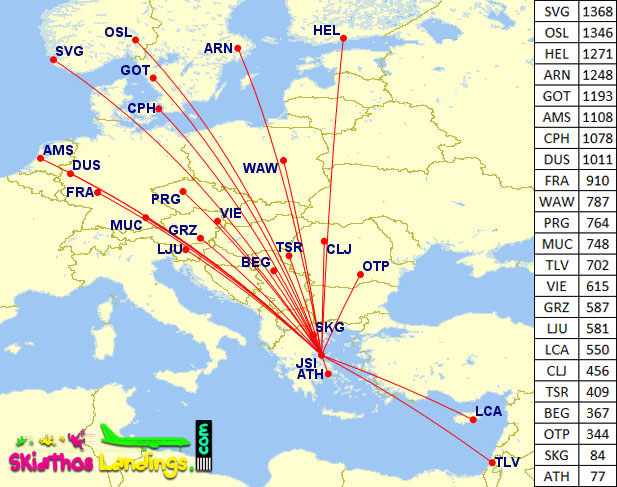 *Domestic figures based of 886 operated commercial flights by regular airlines (Olympic Air, Sky Express). A number of approximately 100 flights of light private planes (2 or 4 seated and similar capacity helicopters) are not included. 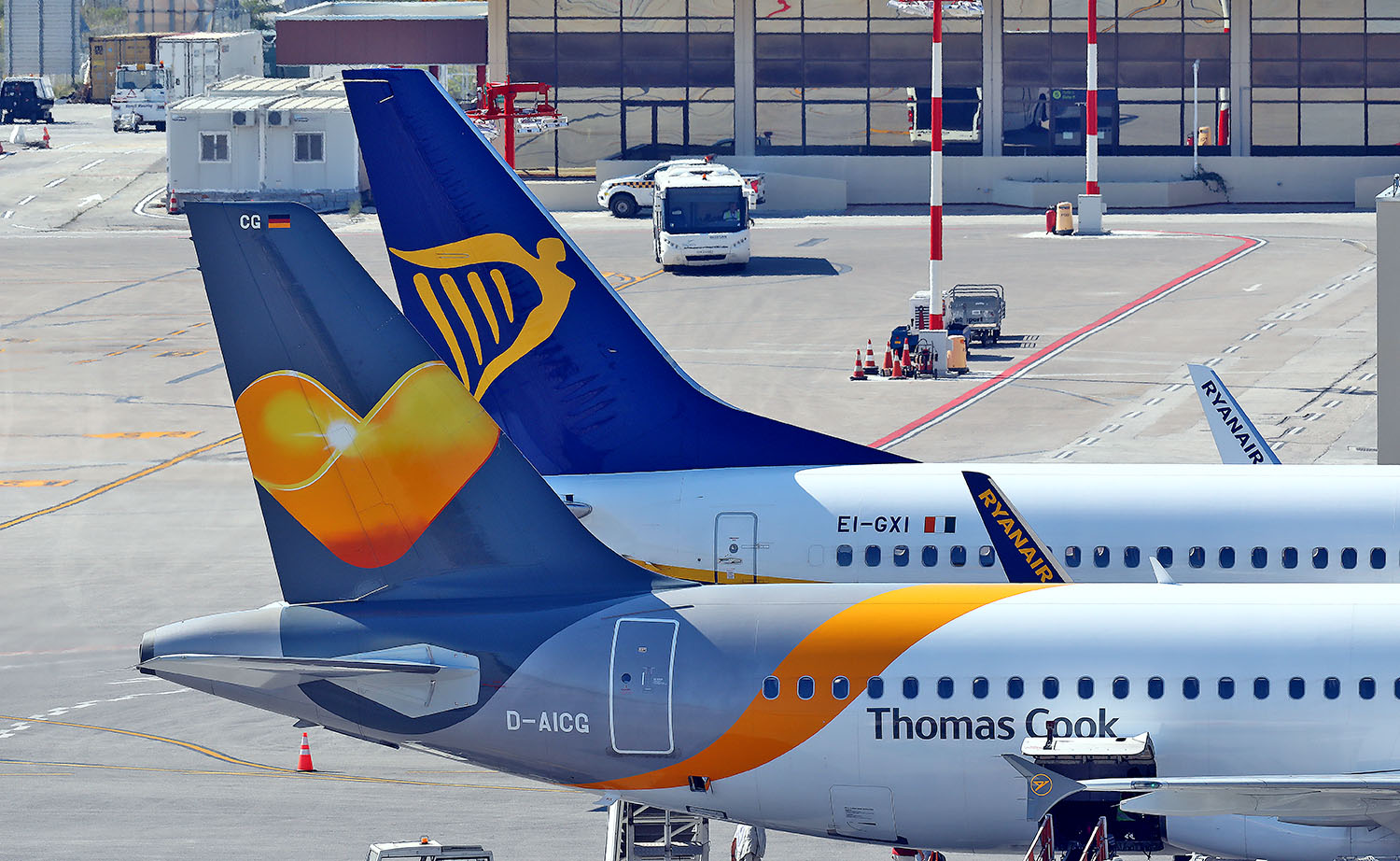